I had a dangerous epiphany about three hours into Orc Attack: Flatulent Rebellion: This game will never get better. I’ve seen everything I was going to see, did everything I was going to do, and any further steps I take into this game will produce things that will look and feel no different than anything else I’ve done. And by the time the credits rolled, I was damning my Nostradamus-like foresight. I’m giving myself a little too much credit, as it turns out, it wouldn’t take very long to realize that this hack and slash was in no way unique or different than any other on the market today. And that’s only where its problems begin.

As soon as you step into the big, clawed shoes of the O-Team – a boy band of freedom fighting Orcs – you’re greeted with pretty much the only story you get all game. Human’s are settling in your natural habitats, destroying them and raising their big evil cities in place of trees and whatnot. They also capture and eat orcs, for some reason that they never really get into. The narrative is written incredibly poorly, both in syntax and structure and general understandability, and delivers a story so full of plot-holes that you’re almost glad there’s very little of it to speak of. But beat em’ ups aren’t about story, right?

Armed with fists full of big, heavy beating sticks, you are tasked with beating back the human aggressors, one map dot at a time. Pressing square (and sometimes triangle to break enemy shields) will be the extent of this undertaking, as the enemy sets take more of the Dynasty Warriors route than any other game. There are very few uses for real melee strategizing during battle, as doing anything but spamming the normal attack button is asking for trouble.

There are combos and special moves to learn as you level up through the game’s rudimentary role playing elements, but they are superficial at best. Attack strings feel very stiff and unresponsive, and special attacks that involve holding buttons work seemingly only when they choose to. Being able to pick up shields scattered throughout the levels is a nice touch to add a little bit of staying power when the going gets tough, but it isn’t enough to change the fact that all you’re really ever doing is bashing enemies with the same four-hit attack string for way too long. And for those creatures you can’t simply just bash, you can always fart on them. Yes, fart on them.

The game fails at humor in many ways, but the “gas attacks” are probably its biggest disappointment. Not simply because you have to be a ten year old to think running up and farting on someone is funny more than twice, but because this particular mechanic is one of the only ways the combat in this game offers any real variation. It comes to the point where if using the ability means conceding to seeing this played out fart joke another time, just smashing square harder and faster is the better option. 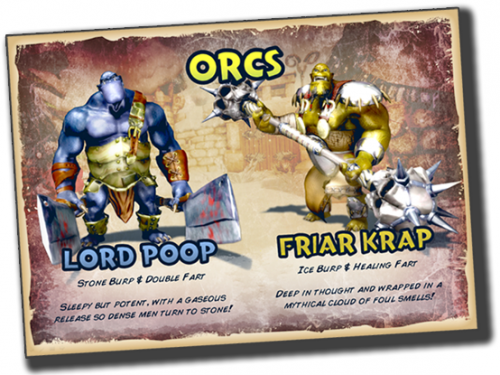 The AI in this game is some of the worst in this generation. Escort missions become countdowns to when your client throws himself into a river that he mentioned just minutes before that he can’t swim in. Enemies have a habit of just standing and watching you beat up on their brethren and attacking only when it seems like you’re clearly out of effective range. Bosses have predictable patterns that are incredibly similar to one another. The uncontrollable camera may be the hardest enemy for you to surmount in this game, as it is almost always at the wrong angle, making it nearly impossible to gauge distances between the many mobs of fanatical fodder and anything intractable in the stage.

The AI in this title makes it extremely easy for you to beat it up. The trade off being, it seems, that you have to look at it to do it. This games graphics are so ugly it’s almost nostalgic. You almost get excited, remembering when PS2 games looked like this, but are pulled back to the real world when you remember that its the end of the PS3’s console cycle, and there’s no great excuse for the texture-less models with strange bodies and unnatural faces. The blandness of the game’s few varying locales is almost shocking considering how different they are from each other.

The soundtrack may be the best thing Flatulent Rebellion has going for it, and that’s only because it’s forgettably mediocre. High falootin’ fantasy ballads become the light breeze beneath your wings as you struggle for really any reason to continue playing this game. Especially when you look at its contemporaries (DmC, Metal Gear Rising, Dynasty Warriors, etc.), you’re not sure whether to have more respect for other games, or less respect for this one.

This game struggles, not only to isolate itself from the herd of games just like it, but to even keep pace with its competition. Not only does is look like a game from decades past, it plays like one too. As a beat em up action game, it fails at the genre’s most core of competencies: responsive and rewarding combat. Enjoying this game will be a task bigger than the most fearsome forest orc.

*Review based on PS3 download code provided by the publisher.