Even though it was not my own generation, the pop-culture and colors of the 1980s have always fascinated me.

It was those bright blues, hot pinks, and the backdrop of a 1986 Miami that first grabbed my attention when I discovered Ghosts of Miami, a visual novel by developer Pillowfight Games who might be best known for their work on We Know the Devil. Holding bubbly character designs and a catchy dance-pop soundtrack, I didn’t expect the game to be a crime drama with a narrative revolving around the investigation of a string homicides. But the biggest surprise Ghosts of Miami held for me, someone who is the son of two immigrants from El Salvador, was just how well it realized its Latino characters and spaces.

There are several moments in Ghosts of Miami where its lead character, Consuelo “Chelo” Martínez, has conversations with Mickey, her older brother. They talk about their careers, their day, and family. Specifically how Chelo should keep in better touch with their mother. In these conversations, there is a lot of code-switching between English and Spanish.

Code-switching can be a great way to have dialogue between Latino characters in a way that feels natural and modern, especially if your characters find themselves between spaces where they primarily speak English and only sometimes use Spanish, usually around family. But when code-switching is implemented haphazardly, it can feel like a desperate attempt to accentuate a character’s ‘Latino-ness’.

In developer Telltale Game’s The Walking Dead: Season 3 there is a scene where a Latino character and his sister-in-law are scavenging for supplies, and as one would expect they run into a zombie. Up until this point in the game, the use of Spanish in the game by these characters is very minimal. This is also early in their encounters with the undead, and they are still very shocked after the experience. Catching their breath, they question what these ‘things’ even are and what they should call them. Out of the blue, one character emphatically states the name “muertos”, the plural form of the word meaning “the dead” in Spanish. It’s a moment that feels out of place. Granted, it’s a small moment, but for someone who wanted to invest in these characters, it left a blemish for me and made it that much harder for me to buy into them. Later in the season, the game does finally dive deeper into these character’s Latino backgrounds.

In Ghosts of Miami, Spanish phrases and slang are planted into dialogue consistently and deliberately where they make sense in the conversations of Chelo and her brother, as well as in other places throughout the game. They also don’t always talk about what it’s like to be Latino. Yes, Chelo loves flan and her mother’s homemade Cuban cooking, but she also loves Star Trek. She’s also excited about this new movie coming out called Top Gun and has conversations with her friends on whether they would kiss Tom Cruise or Val Kilmer. These conversations feel dynamic, like an actual dialogue between real people. That genuineness is also present in the places of Ghosts of Miami. 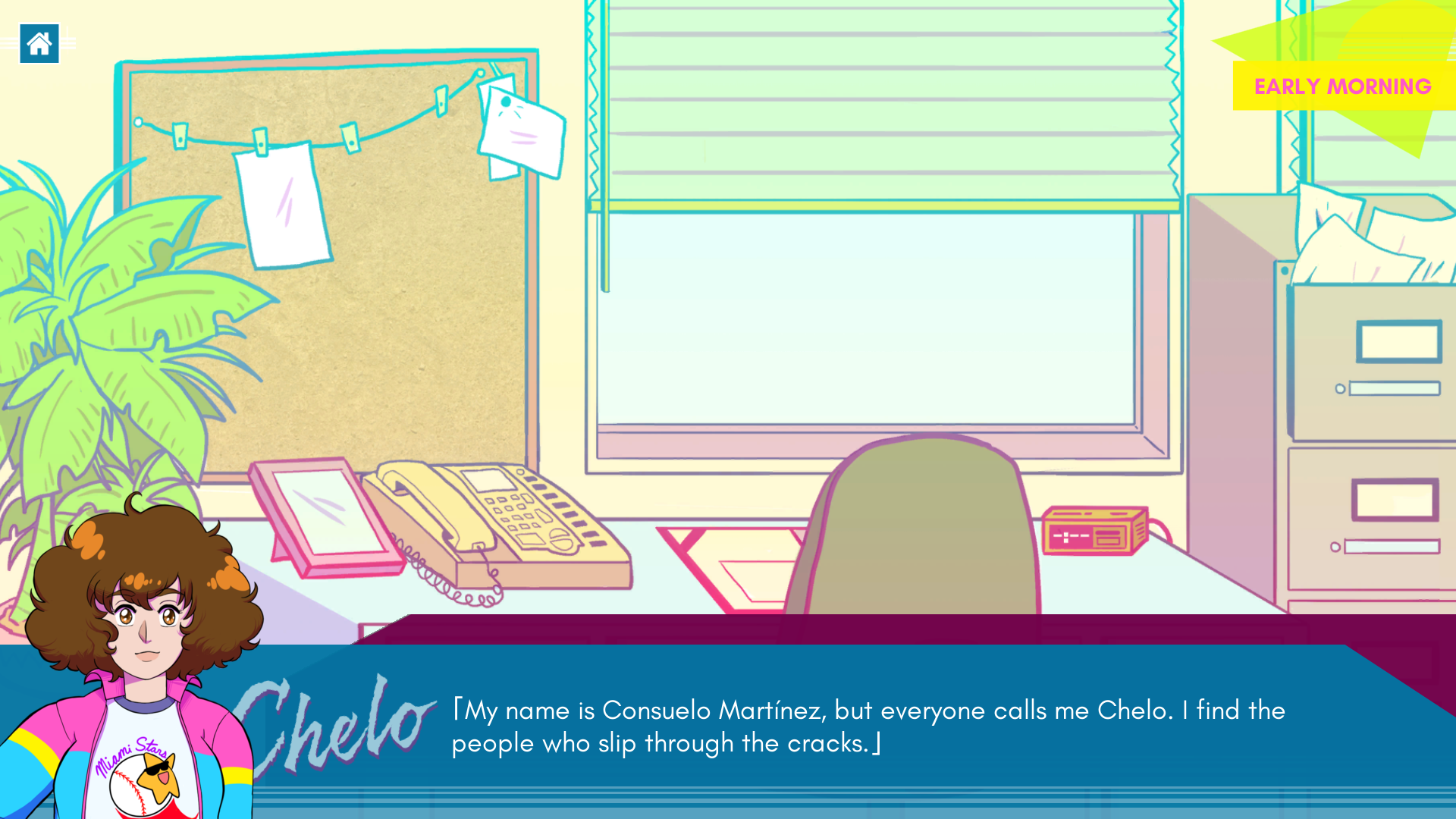 When players are first introduced to Chelo, we find her at a point in her life when she is setting up her own detective agency. It’s a business that is on the second floor of a quaint bodega in a small, diverse neighborhood. It’s the sort of store that would be in the television show Miami Vice, but there it might actually just be a front for the cartel’s drug smuggling operations. In Ghosts of Miami, it’s a place where people can get the products they need from a kind owner who might speak their language or dialect, it’s an institution of the community.

Having grown up in a neighborhood somewhat similar to the one Chelo lives in, I’ve been to businesses like it before. It’s the sort of store that would be the last stop on my mother’s grocery trip after we went to the giant supermarket so that we could get that one ingredient that would make her cooking taste distinct. Seeing a place and the people who frequent that place be represented so well was something I had never expected from a game, and it was an experience I found heartening.

A discussion that I was reminded of when I was approaching the end of Ghosts of Miami was one involving Waypoint’s Austin Walker and Patrick Klepeck on the subject of We Are Chicago, specifically how it severely stumbles in achieving its goal of giving an accurate portrayal of what it’s like to be black and living in the South Side of Chicago. I was pleasantly surprised and impressed that Ghosts of Miami was able to overcome some of the similar hurdles We Are Chicago faced pertaining to race and diverse communities. Up until I played Ghosts of Miami, I had never played a game with Latino characters and themes that I could connect with, I didn’t even think it was possible, and now I want to see more.

Code for Ghosts of Miami was provided by the publisher