From the first stills of this hopeful from Director and Art Designer Alex Preston (AKA Heart Machine), the art direction’s isolating and dangerous, neon, dark wave vibe holds your eyes in it’s hypnotizing allure. It’s color palette is never settling, always based on the grays and greens of dark 16-bit dungeons, but highlighted with blades of vibrant pinks and blood reds. It’s moody, ominous, and absolutely intriguing.

At its core, Hyper Light Drifter strives to be a Nintendo-era adventure game from the wrong side of the tracks. Describing this game as one that “plays like the best part of A Link to the Past and Diablo,” that declaration alone makes this game a terribly exciting prospect for an old soul like myself. Not too old, though; bringing modern sensibilities to the tried-and-true dungeoneering experience is part of the design focus of Preston and fellow lead designer Beau Blyth (the upcoming Samurai Gunn). 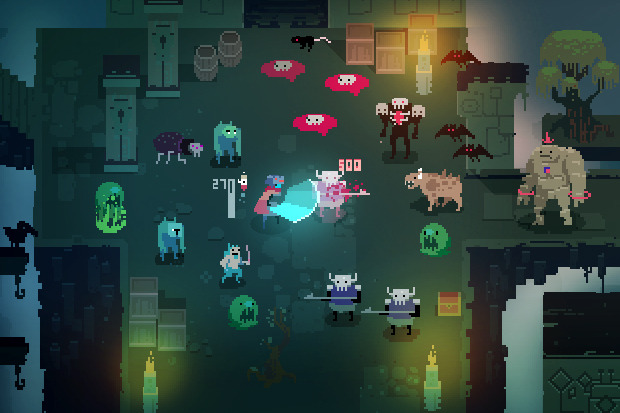 The core mechanics are illustrated and one filled to the brim with standard Action RPG fare like collecting items that affect the real time combat in a number of ways. Combat that has been promised to be brutal and challenging, yet accessible. In motion, it looks like Spooky Squid’s They Bleed Pixels with a Zelda-style camera angle.

Though no bits of audio or actual gameplay is available outside of the official trailer, the soundtrack has a lot of promise. Produced by Rich Vreeland, the bleep-blooper behind the runaway hit puzzler Fez, the ear-fondling potential that the screens produce for hypothetical sound designs is enough to keep an indie kid up all night.

Is your interest thoroughly piqued? For the nitty gritty on donations, and any other details your little heart could desire, check out their Kickstarter page, and keep your fingers crossed.