Kickstarter is a good source for indie developers to get the funds they need to make a game. Sometimes, it’s the first game they’re ever making. Although, the drawback of this method is that if these games don’t get lots of exposure from news sites and word of mouth, then these games might not meet their funds. So in an attempt to bring awareness to gems that are on Kickstarter, I’ll highlight any games that are worth donating towards.

The first game I found that should be highlighted is a game called Errant Heart. This game is being made by a small two-man group named Pseudome Studio. Both are trying to make this a game that they’re proud of.

The game itself is a visual novel, and that means they have an uphill battle to fight. The game is set in a 1940s Europe, starring a young painter named Lira Moretti. She goes to live in a new city in hopes to establish herself as an artist. However, before she arrives she has a strange encounter with a street urchin that leaves a gap in her memory. This is the basis of the story.

Throughout the story you’ll encounter an assortment of different characters. Such as the archeologist named Cassandra, who came back from an expedition with a young girl that helped her during her stay. Then there’s a handsome man named Karl Drake who works in a veterinary hospital. And certainly they have another interesting character in the name of Nina Flores. She’s a young woman who excels in mechanics during an era where women aren’t as accepted for work as they are today.

While a visual novel is not for everyone, anyone that has a soft spot for the story in games can enjoy these types of games. Visual novels are easily the least game-y out of all the game genres, but that’s precisely the point. The gameplay is always minimal, because the shining beacon of these games are the characters and the stories. Each one of these games live or die by their characters and story. While Errant Heart is too early in development to know how the story is I have faith that the story will be something worth playing through.

If you’ve read this far then you’re either fully interested or still hesitant. At this point I can only recommend you check out the kicstarter itself, and make your final decision to support the project or not there. 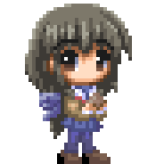